THE FIRSTIES | THE FIRST TIME I WENT ON A CRUISE 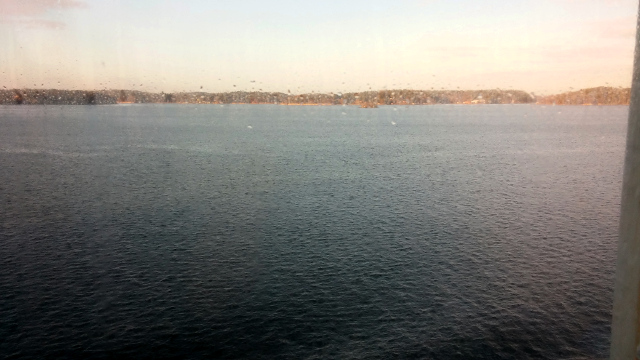 Hello amigoos! June 1st and time to share with you another story about one of my firsties! Today I decided to tell you about the first time I went on a cruise. Just remembering it I'm already feeling so happy! It was a lifetime experience.

Well, in 2015 me and Fernando were exchange students in Finland and we wanted to visit Sweden, more precisely, Stockholm. We discovered that there were some cruise ships that traveled from Finland to Stockholm.

I don't recall exactly the price of the trip, because its been a long time, but I think it was around € 200,00, including the return and food inside the ship. Of course, the price depended on the cabin you choose. I think we chose the cheapest!

We couldn't miss this opportunity and we decided to go!

The ship left from Helsinki in the end of the afternoon and it was supposed to arrive in Stockholm the next morning. The pre-boarding was really similar to a pre-boarding in an airport. Things like checking the passport and waiting.

When they finally allowed us to board, the path to the ship was exciting. I remember hearing that song Beat it by Michael Jackson playing and I sang with it and I couldn't stop laughing.

Then when we got inside the ship and they took a photo of us, that we could buy latter, but we didn't! The ship was so beautiful, I felt inside the Titanic. Hahaha! We went looking for our cabin and of course taking a look around. The cabin was simple, without too much decor, without a window and also really small, but more than enough for both of us.

We left our things there and went looking for a window to see the ship depart. It was a very good sensation to see it distancing itself from the coast and all the birds flying on the sky! Then we decided to walk around and discover what we could do.

In Finland there are gambling machines where you put a coin and push a button. If three equal images show on the screen you win some money. There were a lot of those machines inside the ship and I decided to gamble for the first time in my life. I lost 20 cents and was very angry!! Hahahaha.

The ship was huge, there was a cinema, a spa, a karaoke, some restaurants, a free shop and a common area to use the WiFi. We spent I lot of time on the free shop, but we just bought an M&M's. Hahahaha. Then we went to the external area to see the ocean, but it was too windy and we couldn't stay out there for long.

We had already paid for the food, so we could eat in the main restaurant of the ship. It had a BIG buffet with many delicious things and an amazing dessert table!! After eating we went to the karaoke and watched people sing. Then, we stayed in the common area for a while and went to bed.

Next morning we woke up, ate breakfast and a while later we were already in Sweden. We had the whole day to visit Stockholm. And in the end of the afternoon we went back to the ship to go home.

When we left from Sweden port we stayed in the external part of the ship to see its departure from the outside instead of from a window. We stayed there looking at the patterns the ship made on the water and watching the buildings disappear.

In this second night we were super tired after walking a LOT in Stockholm. So we just ate dinner, stayed in the common area for a while and went to bed. Next morning we were back in Finland!

None of us felt sick because of the movement, I just felt a weird sensation when I was laying on the bed, before sleeping, but that was it. Actually the ship was very steady.

I know it was fast, but it was a perfect first time on a cruise. I couldn't wish for better. 😍

P.S.: You can read my other THE FIRSTIES stories by clicking HERE.

Now, tell me on the comments bellow. Have you ever went on a cruise?