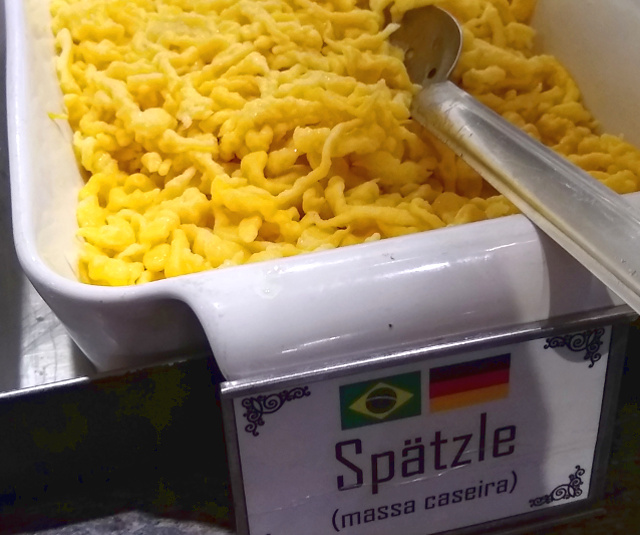 Hello amigos! This post is about an experience I had a few months ago! When I went on an excursion to visit these two very small cities in Santa Catarina: São Martinho and Gravatal. Well, although they are very small, they have some hidden treasures.

I think I went only on two excursions in my whole life. In this one from Florianópolis to São Martinho and Gravatal, Fernando was with me and we thought that there was going to be only old people in the van. Sorry, but in my mind excursions were famous mainly among the elderly.

But I was wrong! There were also many young people in this excursion. And actually, excursions are a very good a idea when you don't want to travel alone. They are also great to visit places that are only accessible by car.

The second was the reason why we decided to go! Since renting a car for only the both of us would be more expensive and more exhausting.

We went with Guia Geovane. The price was R$ 159.00 per person and besides the transport it also included a lunch at the Fluss Haus restaurant and beverages inside the van.

There were some predefined pick up points, and since we lived near one of those it was easy to get there. It was a one day excursion, we left around 7 AM and returned around 9:30 PM.

Guia Geovane also offers excursions to other cities in the state, including hiking 😍. But this is the only one I went. I wish I had had time to go in some hiking excursion.

The next topics are the places we stopped and also about the things we did. There are many tips of what to do, either with the excursion or not! 😉


Our first stop on our way to São Martinho was this place called Engenho Lanches. This is sort of a restaurant and souvenir shop. But behind the restaurant there is a space that used to be a mill and still has some of the equipment.

This place is really big, because there is also a pond in the back with fishes and ducks. And if you keep walking there is a space with some birds, like chickens and turkeys. A little bit hidden lives a cow.

This is a nice place to stop, but we didn't eat anything, after all we were saving the stomach for lunch. Hahahaha. 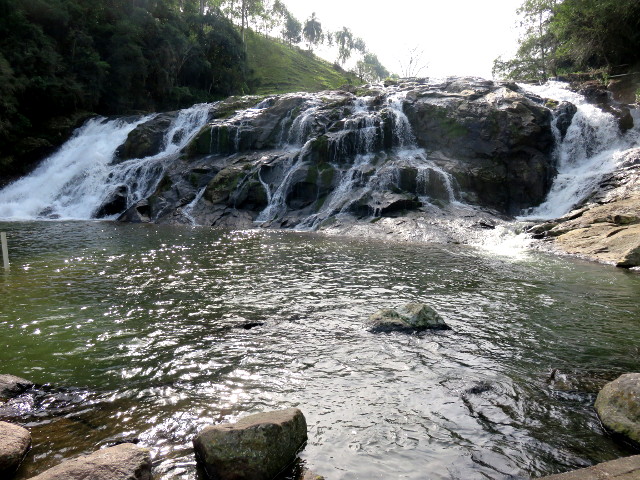 After a couple of hours on the road we arrived in São Martinho and the first stop was a small waterfall. The parking lot is near it so it's not a long or difficult walk to reach the waterfall. Although it's small, it's very beautiful and there are some rocks around that allow you to get closer to the water.

In this space there is also a restaurant (that serves regional food), pools and games like snooker and foosball. But the day we stopped there the pools were empty, possibly because it was almost winter. 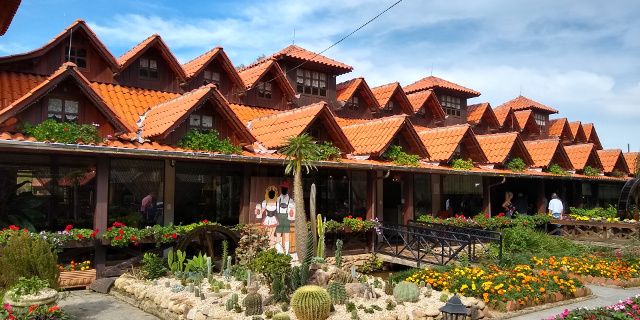 Some minutes later we arrived at Fluss Haus, the main attraction of this excursion (at least for me), which is a restaurant that serves traditional German food!! But actually, this is more than a restaurant. It's also a space with a cookie store, a lake, ducks, fishes and turtles.

But let's go back to the food part. There are MANY food options, I even felt lost. But I took a small portion of everything I wanted to eat. Just so you can have an idea, there are around 110 different dishes in the buffet. 😲

Some of the traditional German food there were Gemüse, Spätzle, Kartoffelpuffer. Of course there were many more and also snacks and a table with MANY desserts. Everything was AMAZING. Juice, tea, coffe, milk and hot chocolate are included. 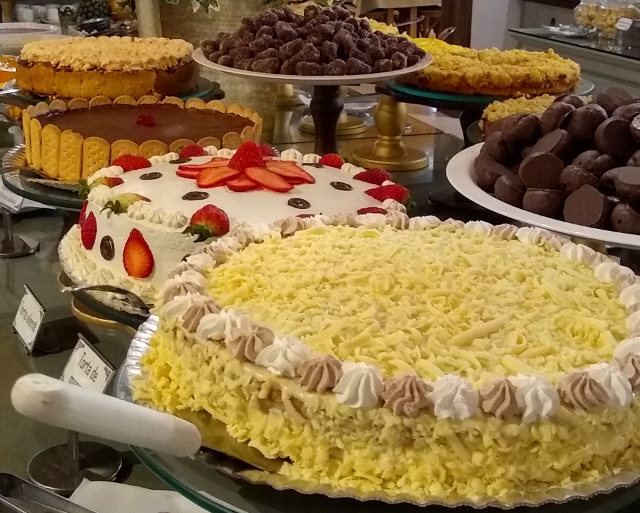 Be aware that this lunch is only served on weekends and holidays. Although the restaurant is open everyday, but in the week days they just serve afternoon coffee.

After lunch we walked around the space and visited the cookie store, where there was a small cookie town! 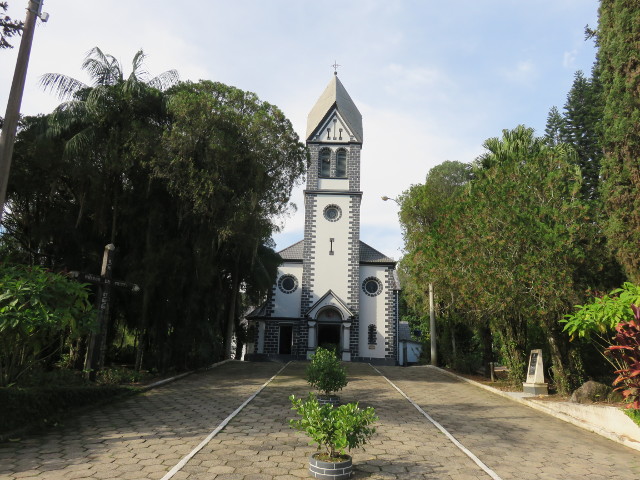 After lunch we headed to São Martinho downtown where there is a lovely church, some souvenir shops and a cookie store called Kindertraum (children dream) with the most beautiful cookies I've ever seen. I even bought one for me in a cupcake shape. 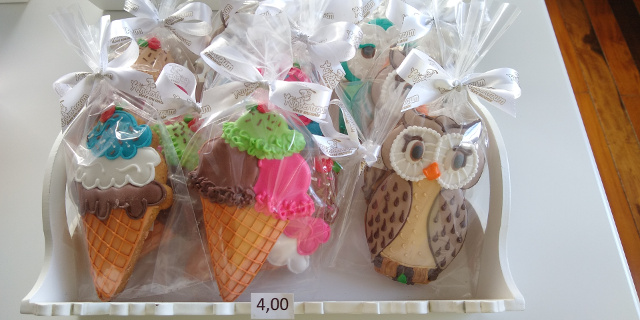 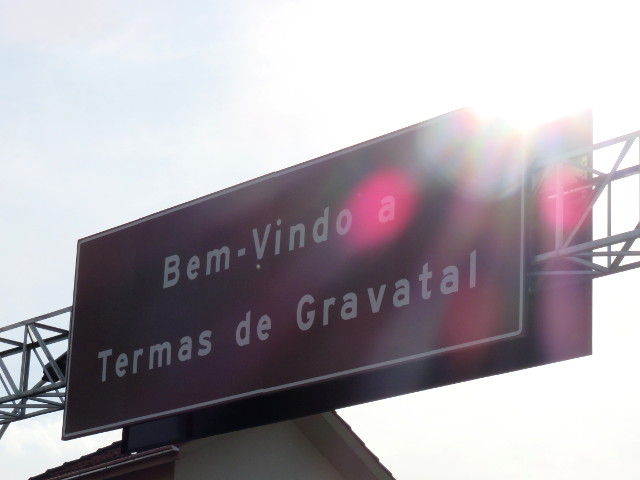 One hour later we were in Gravatal, the last of the stops of the excursion. This is a VERY small city and the guide let us roam free in the city center. We found out that people like to go there to shop, since there are MANY clothing stores with very low prices.

Well, even though we didn't bouy anything, we visited some stores and then walked around there, we found a square and lastly we decided to buy an ice cream and relax till it was time to go back.

Gravatal has a hot springs park. It is right in the city center and I've never been there, but it looks pretty fancy. Hahahaha.

In the end of the afternoon we went back to the van to go home. And that was our one day excursion. It was fun and delicious!


Now tell me, are you a fan of excursions?
Have you already visited this part of Santa Catarina?
Labels: Brazil Destinations Gastronomy Gravatal Santa Catarina São Martinho