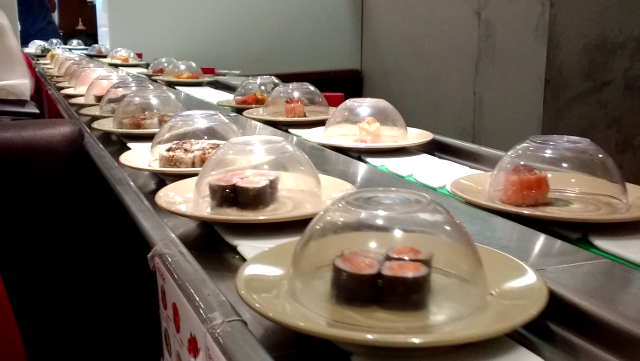 Helloo amigos! I NEED to start this post saying that it was my dream to eat conveyor belt sushi and also that I'm not a very good fan of sushi. Hahahahaha.

That could seem a little bit contradictory, so let me explain. Actually, I don't like sashimi or any preparation with raw fish and normally this is the most common type of dish in Japanese restaurants.

Just to make it clear, the pictures of raw fish you are going to see here is thanks to Fernando, who ate them all. Hahahaha.

OK! After this big introduction let me start talking about Wamaki, the restaurant where I ate conveyor belt sushi for the first time!

When we went there to have dinner the fixed price was R$ 154,40 for two persons using a coupon. This coupon isn't available anymore. So, nowadays (May 2020) the price is R$ 87,90 per person, according to their Facebook page.

During lunch the price is R$ 58,90, but less dishes are included. I don't know which because I never went there during lunch and in their social media they don't make it clear.

They serve MANY sushi options like hossomaki, uramaki and nigiri, all of them with different fillings. Some appetizers are sunomono, missoshiro and ceviche. They make tuna, salmon and white fish sashimi and you can order as much as you want. They also have temaki with different fillings, yakisoba, meat and salmon teppanyaki, and, as sides, shiitake, ika furai and ebi furai. For dessert you can order a chocolate harumaki, a banana fried sushi with dulce de leche or nutella.

MANY things right? If you felt lost with all those names search them on Google to see pictures of each one! That's what I do. Hahahaha. But let me tell you my opinion about the food. Most part of the food I liked VERY much. But not everything was perfect. I can mention two things, the chocolate harumaki was terribly full of oil, it wasn't good! And one of the salmon teppanyaki was raw in the middle, as I said I HATE raw fish, but also this should be a dish with a perfect grilled salmon and it wasn't!

Well, the overall rating is good! If you like Japanese food or also dream of going to a conveyor belt sushi restaurant, I think Wamaki is a good option.

Now, tell me! Are you a fan of Japanese food? If you already ate at Wamaki in Florianópolis leave a comment telling us your impressions either. 😊