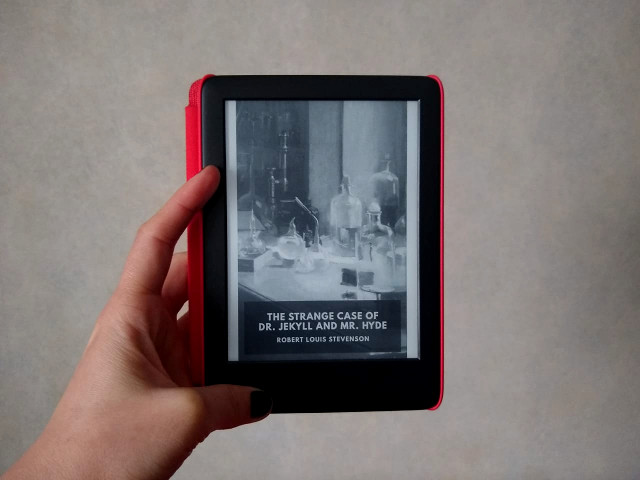 Heey amigos! I finished reading this classic book some days ago. So, let's talk about it? 😊

Written by Robert L. Stevenson at the end of the 19th century, The Strange Case of Dr. Jekyll and Mr. Hyde is considered a fiction and horror book! But it isn't scary at all!! The book is more about good and evil, and also about a disorder that I think wasn't well known at the time!

The story happens in London and begins with Mr. Utterson, a lawyer, talking with his cousin. The cousin then tells him a very weird story about a Mr. Hyde. Mr. Utterson gets worried since his client and very good friend Dr. Jekyll had written a will leaving his fortune to Mr. Hyde in case of his death or disappearance.

Mr. Utterson tries to advice Dr. Jekyll about it, but he doesn't seem to care. So, the days passed... and suddenly Mr. Hyde does something VERY wrong and is now wanted by the police. Mr. Utterson, as a good friend, tries again to talk to Dr. Jekyll and he seems more concerned.

During the weeks that follow Dr. Jekyll starts to spend more time with his friends by hosting dinners. Until one day, he stops it and no longer receive visitors! Mr. Utterson's concerns about his dear friend are increased. But only at the end of the book he and we (readers) find out what was happening to Dr. Jekyll and Mr. Hyde through a letter written by Dr. Jekyll telling the whole truth.

This truth wasn't very surprising for me, because I already knew what this book was about! But if you don't, I recommend that you don't look on the internet for information, so it's going to be more exciting to read it. 😊

Although this is a very old book, it hasn't many of that old English vocabulary and it isn't difficult to read (I've read it in English). Hahahaha! This book is also very short, so you will probably read it very fast.

I liked it (★★★★☆)! It's nice to read a book where the story happens in a time that is so different from our reality. I love reading these types of books to learn the way people behaved and did things. One thing that made me reflective was that a witness saw when Mr. Hyde did something terrible. And when she told others that the criminal was Mr. Hyde, everybody believed her! Nowadays is so difficult to rely on somebody else's word!

Since this is a public domain book, you can download the ebook for free HERE. But if you want to buy the physical version, for example, you can click HERE to go to Amazon website. If you buy this book or any other product using my Amazon link I'll earn a small commission. That's why I recommend this website. 😊

One last thing, I want to recommend a song from a band I like that is related to this book: Mz. Hyde - Halestorm. 😉

Now, tell me! Have you already read or want to read this book? What are your impressions of it?
Labels: Books Ebook Kindle Review