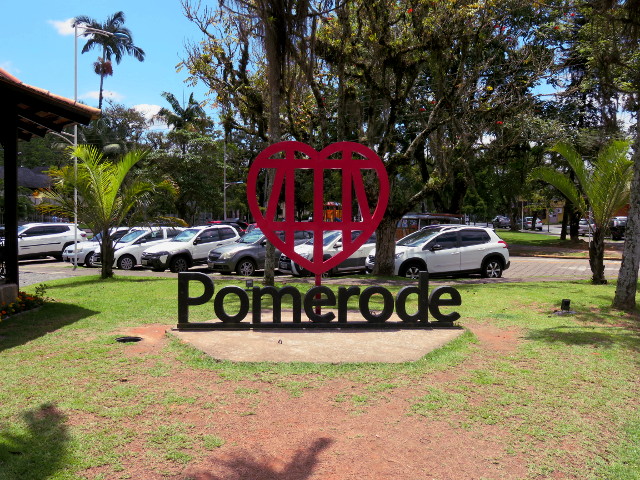 My trip to Pomerode was super fast (1 afternoon + 1 night), so I didn't have time to do all the things I wanted. But I decided to write a post with my experiences anyway and I'll also include a list of attractions that I wasn't able to visit. When I visited the city none of the famous festivals were taking place. And I found this city kinda with nothing, I left there with the impression that the tourism is based on spending money and eating, because the nicest things there were the restaurants, bakeries and stores.


I'll you tell you more about my impressions during the post. So let's start with...

As usual I looked for the cheapest accommodation I could find in Pomerode. And we chose to stay in a hostel, called Hostel Mais. I think that I already stayed in 4 hostels in my whole life. And I can say with conviction that Hostel Mais was the best of all of them. I was really impressed with the organization of the place.

We chose a couple's bedroom. It was very small, with the bed in the middle of the room and 4 lockers next to the door. The room was equipped with air conditioning (allowed only during nighttime). And they left amenities like towels, shampoo and soap in the bed, we didn't use any of those things because we had brought our own.

The bathroom was shared, very clean and the best part is that it was possible for more than one person to use it at the same time. In the ladies' room there was only 1 shower cabin, 1 toilet cabinet and 2 sinks in the common area of the bathroom. But in the men's room there were 3 shower cabins and 3 toilet cabins.

In this hostel breakfast was included. It was very simple, but good. With bread, cheese, ham, cakes, orange juice, milk and coffee. The owners were very nice with us, they gave us a lot of tips and even called a restaurant to know if they would be opened so we could have dinner there.

This hostel was pretty close to one of the city's gates. And some attractions in the city are within walking distance of this city's gate.

Nowadays, Pomerode is known as the most German city in Brazil. If you grab the touristic map of the city you will read: "Pomerode: Unser Kleines Deutschland" which means: "Pomerode: Our Small Germany". The German immigrants arrived in the XIX century and, to this days, most part of the population speaks German, although I didn't hear any German. Even though there are many other cities in Santa Catarina, like Blumenau, that were also colonized by Germans, Pomerode is a very special one because it is where there is the most concentration of timber framing buildings outside Germany.

Timber framing is that very typical German building style consisting of wood logs assembled together with pegs, so nails aren't used. An example of this type of construction is in the picture below. It is a very unique architecture and also very beautiful.

First I am going to write about the attractions I was able to visit and then I'll list the other things you can do while in the city. But before listing the attractions I just want to say one thing. In Pomerode there is a zoo, I am completely against zoos, so instead of recommending it as an attraction I want to suggest that you don't visit this place. 😉

PORTAL TURÍSTICO: it represents the city's gate and it's a nice first stop at the city mainly because it houses a touristic information center where you can grab a map of the city. This is also a construction in timber framing style, so it's veery beautiful and it's a great place to take pictures. In here you can also find a bathroom to use free of charge and upstairs there is a souvenir shop.


PÓRTICO DO IMIGRANTE: located in the other end of the city, this also represents a city's gate. Also a beautiful construction and a nice place to take pictures, but we didn't stop at it.

CASA DO ESCULTOR ERVIN CURT TEICHMANN: the only museum we had time to visit. The entrance cost R$ 5,00 (US$ 1.31) and the space is bigger than it looks. This is a sculptures' museum, all of them made with wood. When we went there we were the only ones visiting the place and we were luck that the owner was there and made a tour for us, explaining most part of the sculptures. Most of the sculptures on display were his father's and that man was gifted, the sculptures were AMAZING with lots of details and with the tour they became more interesting. It was so nice to find out the reasons why he sculpted that images and some of the techniques he used. I was so admired by the story and sculptures that I completely forgot to take pictures inside the museum, sorry. Hahahaha. But the reason why we didn't have time to visit other museums was because the tour was veeery long. Hahahaha.

ROTA DO ENXAIMEL: do you remember that I said Pomerode has the biggest amount of timber framing style buildings outside German? So, most of these buildings you will find in Rota do Enxaimel which is a region of the city where you can drive through some streets and look at this type of buildings. When I heard about it I got veery excited, but after the tour I was disappointed. Mainly because the buildings are not close to each other so you see a building then drive more and more, see another building and you have to drive more to be able to see another one. And many of the buildings are not completely in a timber framing style, some of them have only parts in this style. Besides, there are buildings inside private properties that cannot be seen from the road. So, what I imagined was that it would be a timber framing buildings village, but it's not. We drove for ourselves through those streets, but I know there are some specialized tours that you can pay and they drive you there and tell you all the history of the place. I think this would have been much better than just driving, but we didn't have time to do that and I don't have any to recommend to you.

CITY CENTER: walking in the city center ended up to be our last activity there. This is a very small city, so many nice things are located in the city center, like the restaurants, the coffee shops, the souvenir stores and also a museum, Museu Pomerano, and the city theater.

MUSEU POMERANO: a museum that tells the story of the city, with antiquities like wagons, furniture, household items, clothing and tools.

MUSEU DO MARCENEIRO: or woodworker's museum, tells the story of a pioneer furniture company of the city.

MUSEU CASA DO IMIGRANTE: another museum about the old way of living in the city. This museum has an exhibition of a house left by Carl Weege, with is typical decor and furniture, besides a water wheel and a mill.

As I said this is a city for you to spend money and most part of that money is going to be spent on food. In traditional German colonized cities one common thing is the Café Colonial which is an afternoon coffee: a buffet with many delicious cakes, cookies, desserts, snacks, sometimes breads, cheese, ham...

Another point is that in here you will find many German restaurants. So it's a great opportunity to try some German food if you never had some and are curious about it, like I was. Hahaha. Lastly, this city is also famous for its chocolate brand Nugali, the craft beers and the homemade jams.

NUGALI: in the city center you will find a Nugali store, well it is a very small store and from all that I've heard I was expecting more of the place. But I bought a lot of chocolate bars, mainly as souvenirs. Of course they were more expensive than the chocolate bars you find on the market, but I didn't find them very special, just normal chocolate.

TORTEN PARADIES: the bakeshop we chose to eat Café Colonial. EVERYBODY we asked for recommendations told us that we should go to this place and we heard them. Hahaha. It is a per kilo buffet with many of that things I mentioned a Café Colonial usually has. I liked it very much, the desserts were very tasty. But I'm not a good person to judge a Café Colonial because this was only my second time eating one. Also, Torten Paradies is a normal bakery where you can buy cakes and even homemade cookies and jams. They also serve lunch.

SIEDLERTAL: this is the restaurant we chose to have dinner. It serves typical German food and this was a recommendation of the Hostel owner. From what I've noticed German food consists of mainly 2 meats: pork and duck cooked in many different ways. Before going to this restaurant sausages where the most common German food I knew (I don't like sausages. Hahaha). But I discovered that another very famous dish is pork knee (Eisbein). I didn't want to eat this too, so we chose the Schlachtplatte (~battle plate) a meal with pork chop (Kassler), sausages (Bockwurst), rice, potato, Sauerkraut and cassava.This is a meal for 2 and cost R$ 85,00 (US$ 22.25). I don't like beer, but there was a big list of regional beer brands on the menu with prices around R$ 20,00 (US$ 5.24). The food was very good, but I found the portion small for 2.

Another famous German restaurant in the city is one called Wunderwald. Citizens told me that this restaurant is VERY good, but also VERY expensive. So, I decided to mention it here as an additional tip for you. 😉