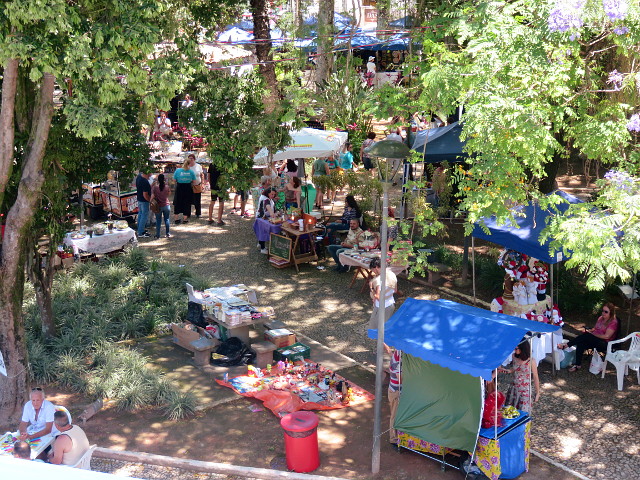 Street markets are definitely a Sunday program. And guess what, Feira da Freguesia only happens on the second Sunday of each month in a square at São José, which is a city pretty near Florianópolis. And the best part is that it happens in the Historical Center of the city, so there are more than just the market for you to take a look.


As you can see from the picture above the square has a lot of trees so most of the tents are in the shadow. There, you will find mainly handicraft objects and food. There are some amazing work there. I liked the woodwork the most, I saw some tables and accessories to store glasses and recipients. But of course you will find some needlework like towels and furniture ornaments.

The tents in the middle of the square related to food sells things like bread, cookies, small desserts and pop corn. The streets around the square are closed for cars on this day, so there are some food trucks parked there, which is good if you are thinking about having lunch. Of course there is a limited amount of options, but I liked the variety, because the day I was there I saw options like Syrian food, pastel—a very common and delicious Brazilian fast food which is a sort of deep fried pie—, hamburger, barbecue, acarajé and tapioca—which are also very Brazilian foods.


We chose the barbecue, a small plate with meat, sausage and bread slices accompanied by farofa—a toasted cassava flour mixture according to wikipedia, also something very Brazilian. It wasn't big, but since we weren't very hungry it was enough for two. Later we ate churros—a very famous fried dough in Spain and Mexico that is now very famous in Brazil too. We ended completely full.

In the very middle of the square there was a small stage with music flowing out of some speakers. A little after 2 PM that Sunday in November there was a Capoeira presentation—a Brazilian type of martial arts that involves dance.


But you don't have to be in the square all the time because, as I said, you will be at the Historical Center of the city. So, what can you also see there?

Well, in all the places I cited above the entrance is free of charge. And while you allow yourself to walk around there you will see some other old buildings and monuments.