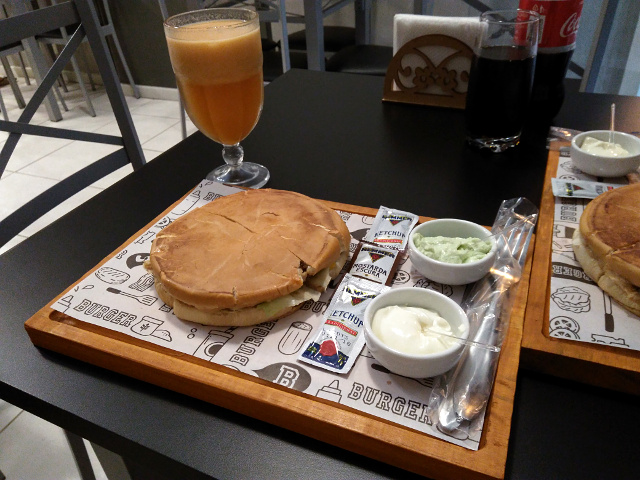 This place opened a few months ago near my house, here in Florianópolis, in a neighborhood called Córrego Grande. It's called Galera which in English could be translated to guys. When we saw it for the first time we didn't give it too much credit, but now that we tasted it we already bought "burgers" from there many times, really. The main reason is because it's cheap and very good, of course.

But why I'm saying "burger", with the quotation marks? Well, this in the picture above actually isn't called a burger here in Brazil, it's called X-Salada, salada means salad. Ok, so few years ago, at least from where I came from, when you left your house to eat a "burger" it was very common for you to eat this X-Salada, or the X-Bacon or the X-Egg. This letter X in Portuguese has a similar pronunciation with the word Cheese in English and I believe it's because of this we call them X-Something instead of Cheese-Something.

Nowadays the burger word is used for a more gourmet type of burger. You can have an idea of what we call a burger now reading this other post in the blog where I wrote about Didge Steakhouse and seeing the picture of a burger there. These new types of burgers are more expensive, of course.

Ok, but let's talk about Galera. It's a small place with great "burgers", but they don't sell only this. Their menu gas six main topics, which are snacks, "burgers", grilled ham and cheese, hot dog, pastéis (very common and delicious Brazilian fried food) and beverages. 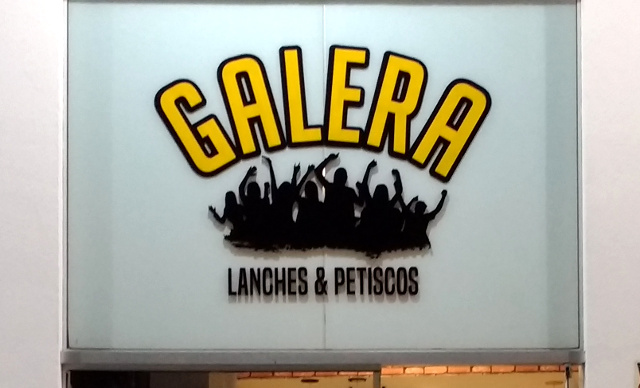 Even though I ate there many times I just ate the "burgers". But if the other foods are as good as the "burgers" then they should be delicious. I ordered (all the times) the X-Salada, its ingredients are bread, mayonnaise, egg, meat, ham, cheese, corn, pea, tomato and lettuce, it cost R$ 14,90 (US$ 3.63). Well, as I said I liked it very much, but I havd the egg and the ham removed because I don't like them. Fernando ordered the X-Bacon, its ingredients are the same as the X-Salada plus bacon, it cost R$ 15,90 (US$ 3.89). He also liked very much.

Well, the menu has many options for each one of the six topics. And I think what I mentioned is enough for you to have an idea. I recommend very much this place.