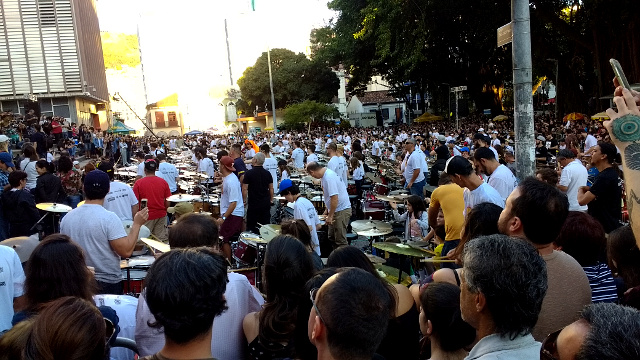 Last Sunday (19/08/2018) happened in Florianópolis a drum orchestra event. I'm writing about it because since 2013 this event happens once a year, so it's a good thing to pay attention if it is going to happen next time will be in town.

Florianópolis drum orchestra is the biggest one in America and anyone that plays drum and have a drum can participate. To be a member of the orchestra you just have to sign up for free a few months before the event. The event happened in Largo da Catedral, Florianópolis city center, an open space in front of a church. It is also free of charge for the crowd.

In 2013 when it started the number of players were 36, this year they were 482. Also this year the public watching it was estimated in 12 thousand people, WOW. Therefore, it's good to arrive early otherwise you'll listen but won't see anything, just heads. There were some food trucks selling beers, snacks and sandwiches.

The drummers were accompanied by a singer and a guitar player. In total they played 10 songs: