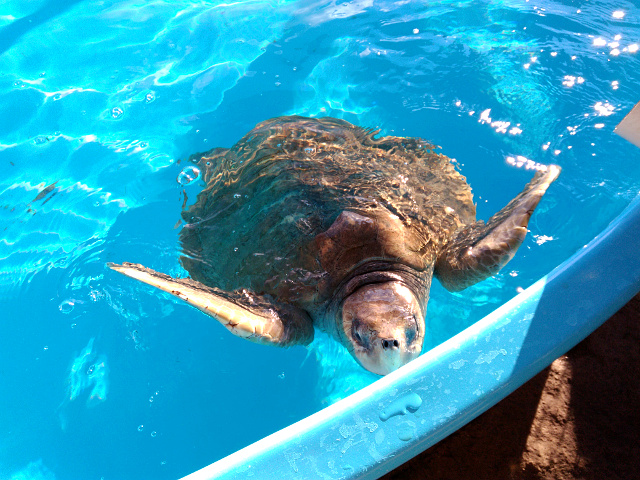 Did you know that of every 1000 sea turtles that are born only 1 or 2 make to adult life? This happens for many reasons, but mainly because of their predators, like crabs that eat the newborn turtles before they can reach the ocean, the predators inside the ocean and pollution, many sea turtles are dying because they eat junk that us humans throw in the oceans. When they reach adult life the most dangerous predator are the humans, because they hunt them to have their meat and eggs when the female turtle comes to the sand in the reproduction period. Just so you know, there are 5 different sea turtle species in the Brazilian coast and all of them are endangered.

Projeto Tamar, from the Portuguese word for sea turtle tartaruga marinha, was created in 1980 with the main goal to protect the turtles from all the non natural harm. So, their work also includes the development of fisherman's awareness.

This post is based on my visit of Projeto Tamar in Florianópolis and the things I heard there, but there are visitors center in other cities here in Brazil: Fernando de Noronha (PE), Oceanário de Aracajú (SE), Praia do Forte (BA), Arembepe (BA), Regência (ES), Vitória (ES) and Ubatuba (SP). In Florianópolis the  entrance fee was R$ 15,00 (US$ 3.87) and if you are a Brazilian student (with a student card) you pay only half of the price.

Visiting Tamar is very exciting because you are able to see a sea turtle very closely and still be helping them. The visitor center in Florianópolis is not very big and I recommend you to go during feeding time, because while feeding the crew explains a lot of things about the project and about the turtles, you can even ask questions of what you are curious.

In the center there are turtles from 4 of the 5 species, because the 5th species is of an enormous size and can dive 100 m in the ocean, so it is difficult to build a pool so deep. There, you will find turtles that live there permanently and turtles that are there temporally. The turtles that live there were captured as newborns or even in the egg and never saw the ocean. It is important to say that the biologists of the project do not interfere in the natural selection, they do not try to save as many turtles as possible from predators in the sand and send them to the ocean. So this turtles that live in the center are the ones that for some reason would not reach the ocean. Having these turtles there is very important, because they can help in many ways, for example, supplying blood to the turtles that come to be treated.

The turtles that stay in the center temporally are turtles that need treatment. The day I was there only one turtle being treated was in the tanks for visitors to look. It was a female turtle that was hit by a boat's propeller and her rear flippers and shell were injured, the biologists were warned by a fisherman who saw her. Nowadays she cannot move the rear flippers and because of that she cannot go back to the ocean where she would be an easy prey, so in the project she is being treated with physiotherapy and they said she has a chance to get better. For the biologists it is very important to return this turtle to the ocean because she is an adult and can reproduce.

Also during our visit they told a story about a turtle that had eaten garbage like plastic and metal. When a turtle eats these kinds of things it cannot eliminate and it does not feel hungry, so it stops eating and dies. This specific turtle was brought to center to be taken care of, but unfortunately it was too late, and it died. They showed us the garbage they found in the turtle's stomach.

The tanks where the turtles live are filled with ocean's water, they clean it once a week and the feeding hour is at 3:30 PM.

The turtles are reptiles and it is estimated that they appeared 100 million years ago. There are 7 different species of sea turtles in the world and biologists are not sure, but believe that they can live 100 years, reaching the adult life around 30 years. They can stay under water from 10 to 30 min and need only 2/3 seconds to breath while on the surface.

While in the center I had the impression that the tanks where very small for the sea turtles. I asked a crew person about it and she answered that the size of the pool does not matter for the turtles, mainly for the ones who never saw the ocean, she said that turtles removed from the ocean to receive treatment sometimes get more stressed. But she told me that the important thing to make the turtles to feel comfortable it is the water temperature, which they control.

The turtles do not have names to not give the wrong impression that they are like pets and to not encourage people to have one as a pet. 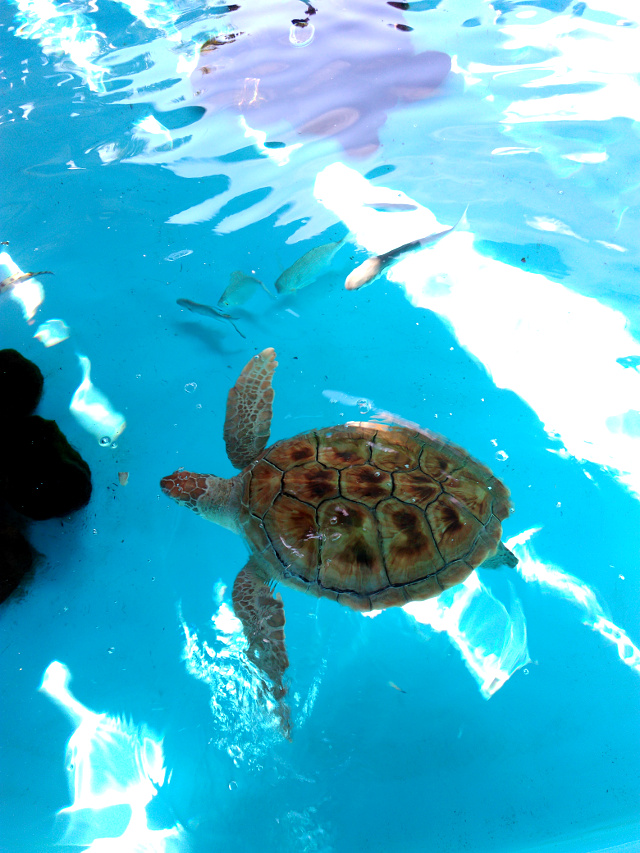