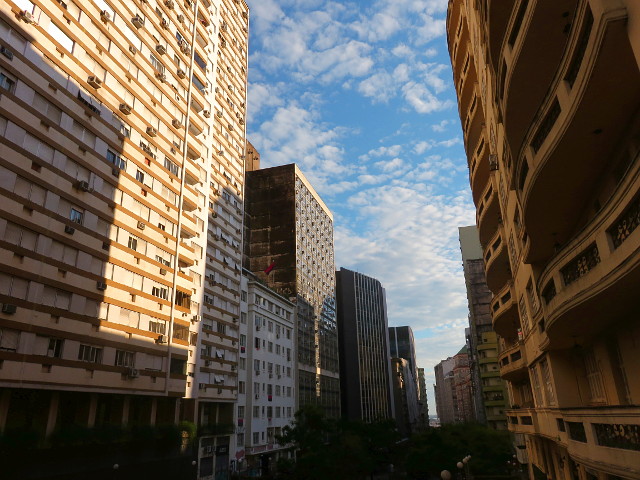 Porto Alegre (POA), the capital city of Rio Grande do Sul and the Southernmost place in the world I have been. The reason we went to POA was a concert, Kotipelto & Liimatainen Blackoustic Latin American tour. It happened on a Saturday night, so we had the whole weekend to enjoy the city.

For what I have read, POA is not a very touristic city, but while searching places to visit I got very excited and started wondering why. Until now I do not have the answer. When I looked at pictures and even in Google Maps it seemed astonishing. But in reality not everything is perfect. This is a beautiful city with a sad reality, there are many homeless people living on the streets, mainly in the city center.

Well, every city has its problems and as I think about tourism as an income to the city I hope it helps in a good way with this situation.

So, we went to POA by bus from Florianópolis. It was a 7/8 hours journey and we arrived pretty early (5 AM) on a Saturday morning at the bus station. It was still dark so we decided to wait in the bus station until the sunrise.

I am going to start talking about the hotel we stayed and then about the places we visited on Saturday. There will be another post with Sunday's itinerary. And just to be clear this was a low budget trip. 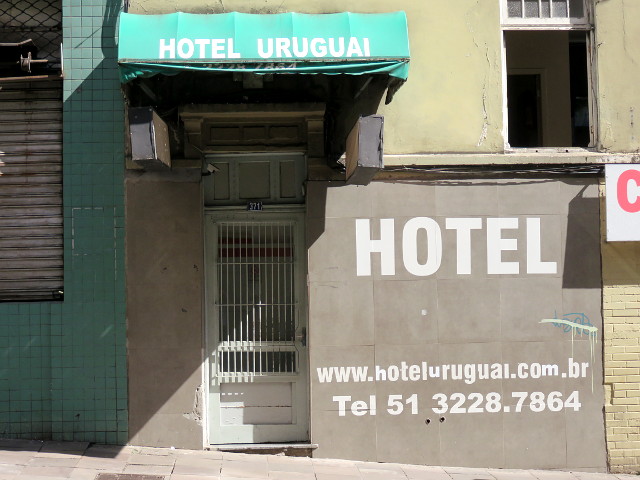 In a low budget trip what do you do about the most expensive thing? Choose the cheapest one, right? So, we tried Couchsurfing, Airbnb, Hotels, Hostels and at the end the cheapest one we could find was Hotel Uruguai. It cost R$ 60,00 (US$ 16.19) the night for two people. We booked in advance using Booking.

I just recommend this place if you are like us, desperate for a low cost accommodation. The bedroom was very small with two single beds, a wardrobe full of dust and a TV. The bathroom was on the hallway and it was shared with the other rooms, it was an old bathroom, but we had a hot shower. It was not very clean, but for one night it was ok.

This hotel is located in the city center and from a walking distance of many cool places.


Now, let's talk about the itinerary (YAAY). Just to be clear all these spots mentioned below were reached by foot. 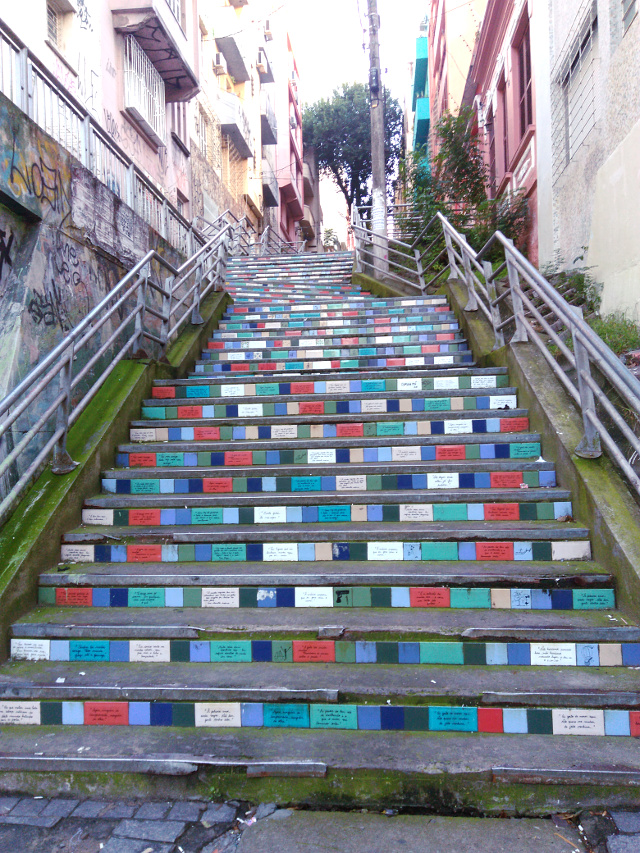 This is a 30 min walk from the bus station. But maybe it took more than that for us, because we got lost. The gps sent us inside a hospital and we had to follow two guys to be able to leave that place (Hahaha).

As you can see Escadaria 24 de Maio is a colorful staircase. It is mainly a place to take pictures. But you can also climb it. I know it has an old appearance but I wanted to visit it and I did not regret it. If you have time you can spend hours reading the phrases on the tiles, but they are in Portuguese. 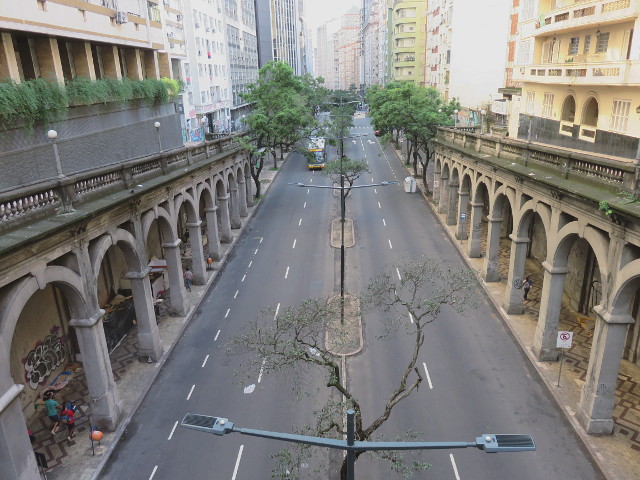 This viaduct exists since 1932 and was built to connect the east, south and center parts of the city. It is an iconic reference in POA. Of an splendid architecture it takes you back in time in the middle of a modern city.

As I mentioned before, about the homeless people, this place houses many of them, I imagine this is because of the protection against the weather. 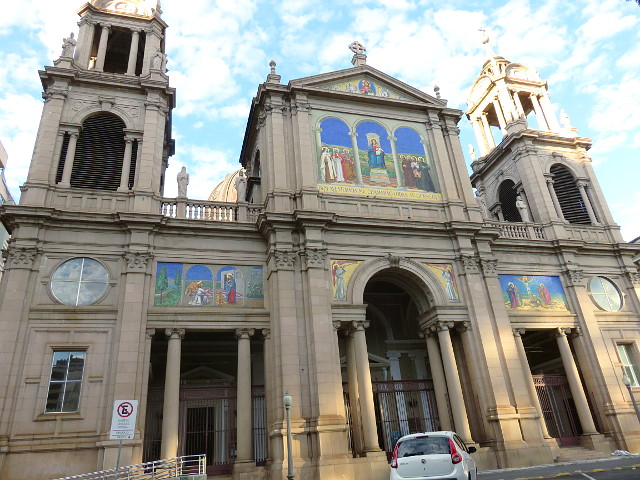 Brazil is a mostly catholic country, so many of the magnificent buildings you will find around here are churches. And in POA it is not different. This cathedral was built based on the Renaissance style and it took from 1920 to 1972 to finish its construction.

The images coloring the facade of the building are actually mosaics and they were made by the Vatican mosaic studio.

Unfortunately, we went there on a holiday Saturday morning and the church was closed. But I imagine that the magnificent aspect of the outside was translated to the inside. 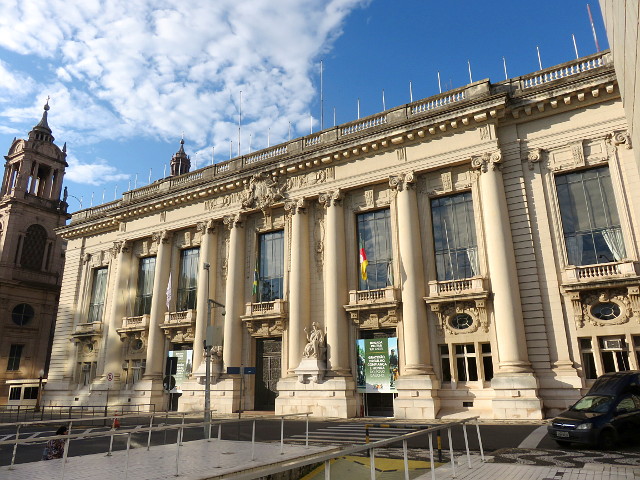 In a neoclassical style this building, next to the cathedral mentioned above, was designed by the French architect Marice Gras. It construction started in 1909 and only in 1921 it started being occupied, but it was considered completely finished in 1970.

Nowadays the palace is the headquarters of the Government Executive Branch of Rio Grande do Sul. But it is open to visitors from Mondays to Fridays. As I said we were there on a Saturday, so it was not possible to go inside (sad). 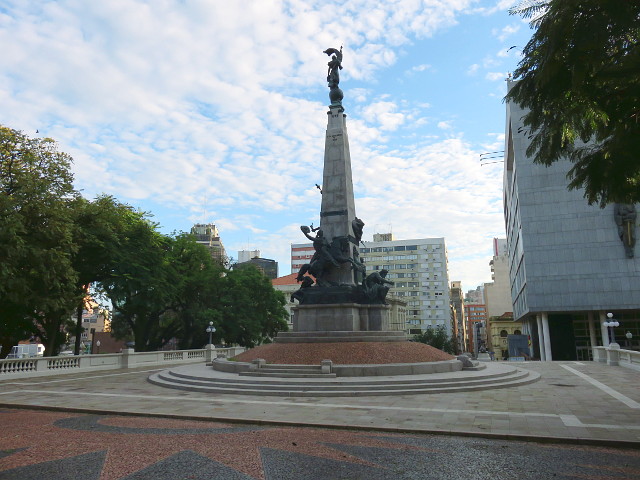 Just in front of the cathedral and the palace, there is this square. A great place for some rest after all the walking to arrive here. While resting you can admire a monument located in the middle of the square and all the beautiful buildings around. 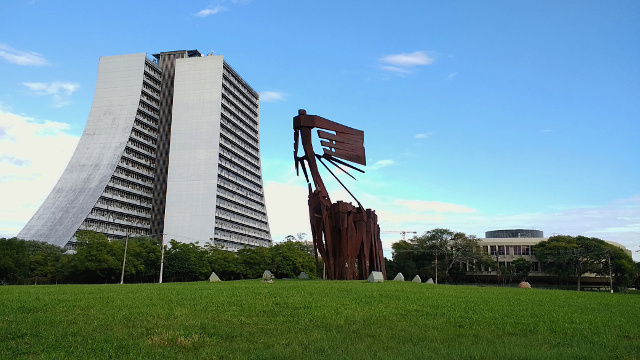 This is just a place to pass through while going to the next stop. Who does not like to admire a sculpture in open air while walking through a city? I guess most of the people, so make sure that your route includes this location.

It was built in honor to the Azorean immigrants and it resembles a caravel.

We just cut through this park to arrive at the coast. Our intention was to walk around there, but the atmosphere was macabre and we did not wanted to risk. The place was empty, unless for that homeless people I talked about before, and the grass seemed no to be cut for a while.

There was a Brazilian barbecue restaurant there, but it was closed by that time. Because of the signs it seemed that sometimes there are events happening at the park, but this was not the case that day. You know, weekends and like this one, a holiday weekend are not the best days to visit a city. 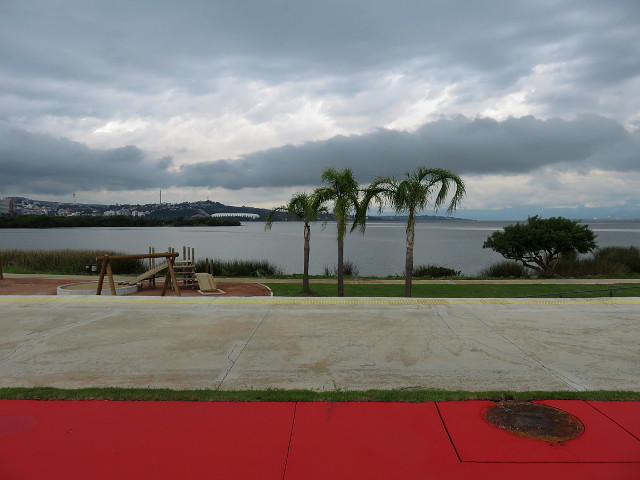 But the park led us to the coast of the city. That day the street was closed for cars and people were walking and biking freely with a great view of the river. We were there in April 2018, and by the coast there was a construction work happening, we could see that there will be benches, children playground and picnic spaces, so you could enjoy some time while admiring the river. Now (June 2018) this space is ready. So now you have another place to enjoy. 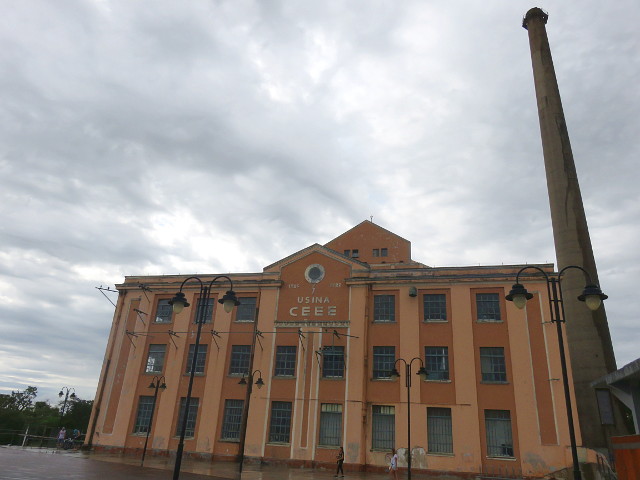 Still on the coast you will find this place. This is an old coal power plant decommissioned in 1970 that later became a cultural center. Unfortunately it was closed in April. There was not any sign saying anything about it, but it looked like it was under a renovation project.

For what I have read, inside there are art galleries and a movie theater.

From there it is possible to pay for a boat ride. We did not try it but I think the best view of the power plant is from the middle of the river.

When we arrived at this point of our itinerary it was around midday, we started our walk very early and found out that some of the places were not open, so it was quicker than we thought. But it is recommended to go there when the sun is setting, people say that it is amazing.

Also while we were at the power plant it started to rain. And since it was lunch time we decided to go straight to the public market of the city. Along the path between the power plant and the public market there are other great places to go and see. But we left them for our second day in the city, so they will be on a later post, Itinerary Day 2. 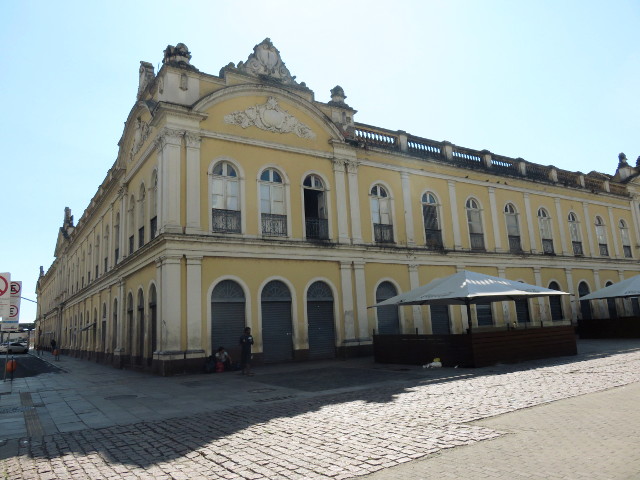 So, the public market. We were expecting to have our meal there, but I think it was not our lucky day, the market was closed. I think it is because of the holiday. Normally the market is open from Monday to Saturday between 7:30 AM to 7:30 PM or 6:30 PM on Saturdays.

This is an historical building finished in 1869. The market is located in a square called Praça XV de Novembro. And since we went there to eat, we found a restaurant in this same square called Chalé da Praça XV. This is a very beautiful restaurant and we decided to get inside because at the entrance there was a promotion sign of two different dishes. Guess what? We order exactly these dishes, because the other ones were expensive in my opinion. 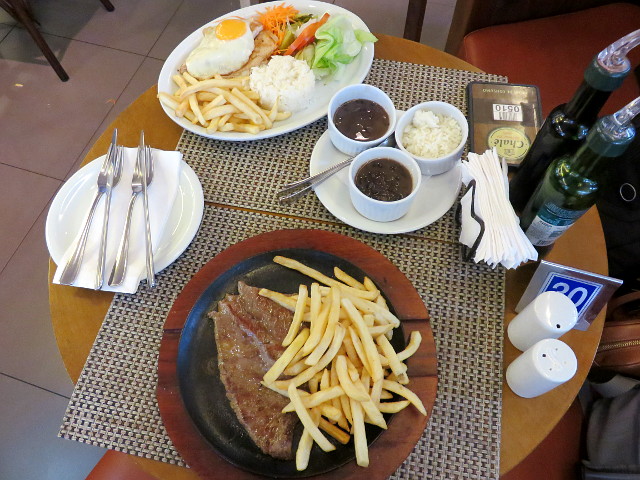 After lunch we decided to go to the hotel, because the rain was very strong. We rested there for a while, went to the market to buy dinner and later we went to Kotipelto & Liimatainen concert. It was on Sesc Porto Alegre, a theater. It was my third time in one of their gigs and I loved it once again.

That's how we ended our day 1 in POA. 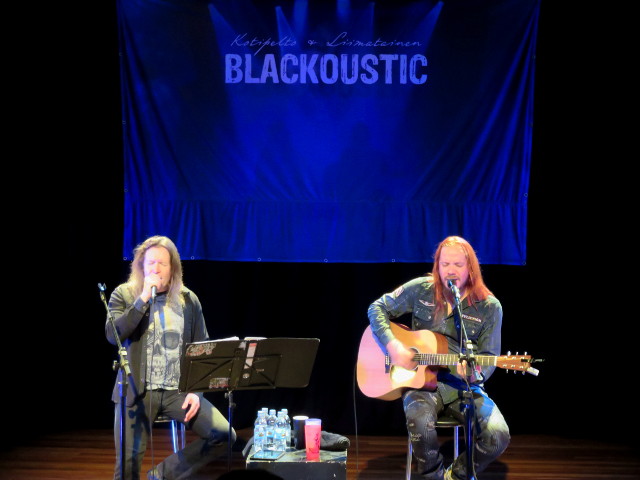