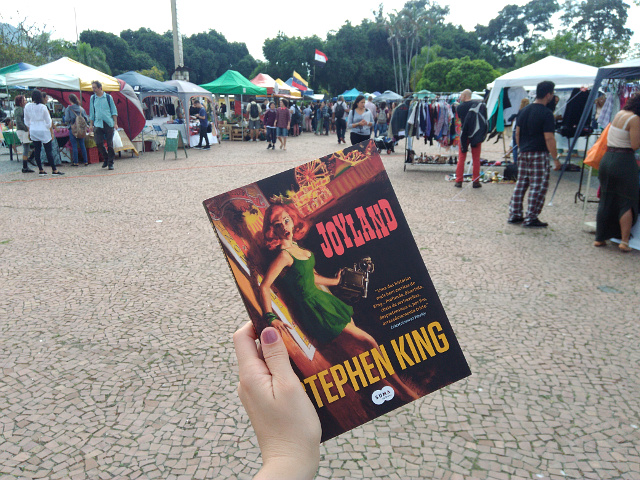 This is the second Stephen King's book I've read. The first one was It (you can read my review clicking on the link). And I'm becoming a huge fan of his books.

So Joyland, right? Joyland is an amusement park and like the others ones during summer it gets crowded. Therefore, more personnel to do the job is needed and that's exactly why Devin Jones, an undergraduate student, got a summer job there. Devin's summer and the mysteries surrounding Joyland are what this book is about. The whole story is told by old Devin, years after that summer experience.

That summer changed Devin's life and he was able to meet very nice people, like Tom and Erin, who worked with him in Joyland, Mike, a boy with a death sentence and Annie, his mom.

The big mystery about Joyland is that years before that summer a girl was murdered by her boyfriend during a ghost train ride and he was never captured. Since Devin heard this story he couldn't stop thinking about it. But the time is passing and the working days in Joyland are so hard that he doesn't do anything about it, until one day when he, Tom and Erin decide to ride the ghost train and Tom sees a ghost, the ghost of the girl. Tom was the only one who saw it and he got terrified, but that event only left Devin more curious.

When the ghost situation happened the summer was almost over, so Devin decided to stay working in Joyland for the next semester when autumn starts, the job will be less consuming and he could investigate more about the murder. Devin asked for Erin's help, so when she went back to her university she collected as much information as she could and handed it to him. At this point they discovered that the murderer could be a serial killer since some similar cases happened with other girls in other parts of the country.

But besides all the evidences they have, Devin can't figure out who the killer is. Every night he looks at the pictures Erin found, but nothing. Meanwhile, he gets very close to Mike and his mom, making Mike's life more fun. They even schedule an exclusive day so Mike can go to Joyland.

Until one day in the middle of the night he has an insight and may have discovered who this killer is. This happens at the very end of the book. At some points you don't know if something will really happen or if this story is just about a normal hard working summer.

I consider this book a thriller, but it is not scary. It is intriguing and since this is a short book you can read it very fast.

The characters are very well constructed and the way King connects facts and people is amazing. And as a King's book there is murder, blood and mystery.