Book Review: Dexter In the Dark #3 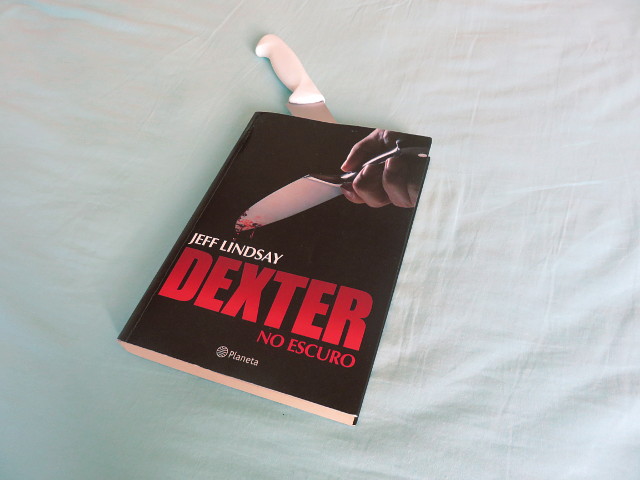 I haven't written a review for the two first books of this series because I've created the Blue Chocolate Experiment this year and I've read those books last year. So, I'll just briefly summarize what I think about them.

The first book is the Darkly Dreaming Dexter and this one is impossible for me not to compare with the TV show, because they are very similar. They tell the same story, but the TV show is much better. I felt shocked when reading the book. Actually I didn't like this book very much, but heard that the next one was better, so I decided to keep reading the series. Here Dexter and his dark passenger are presented. Dexter pretends to be a normal person, he has a normal job, has a girlfriend, has feelings. But in reality no one knows who he actually is. A killer, a person with a need to kill. Harry, his adoptive father and a cop, was the first one to discover, so he created a code for Dexter. According to this code, before killing someone Dexter must be sure that the person is really guilty of doing something very bad. And by following all the rules Harry created Dexter would avoid being caught.

Each book has a main killer that the police and Dexter are looking for. In the first book a serial killer is murdering prostitutes and leaving butchered and bloodless parts of them through the city.

The second book is the  Dearly Devoted Dexter and this one is crazy. Here the TV show and the book are COMPLETELY different, they tell different stories. This book is very intense, with some difficult scenes to process. It is cruel. Here the killer is after some ex-soldiers, mutilating them but not killing them, making them suffer. The killer has a special technique to do this. It is terrifying.

So, the third book, Dexter in the Dark. This name represents very well the story. Because for the first time Dexter is alone, his dark passenger is gone. Dexter starts to research and wander about the origin of his dark passenger and why he disappeared when they faced a crime scene with burnt corpses. Some parts of this book are from the dark passenger's point of view.

After some time Dexter discover that his problems are connected with the killer that the police is looking for. This killer is burning people, removing their heads and replacing them with bull heads as a sacrifice for Moloch, an ancient God.

This particular killer is also after Dexter and without his companion, the dark passenger, he can't figure out what is happening and he thinks that he is going crazy. After researching Dexter introduces the possibility of having two or more killers this time, and he was not wrong.

Besides all of this, Dexter is engaged and planning his wedding. Also, his fiancée has two kids and they have the same special killing desire as Dexter, so Dexter is trying to teach them Harry's code.

With this book in particular you can discover more details about Dexter, you can get very intimate with the character. And it is also possible to understand a little bit about the origin of the dark passenger, but some parts left me more confused. Here you will find a Dexter with feelings for the first time, his first experiences with fear, anger, compassion. In this book there isn't much action, it is more of a reflexive book.